Step it Up Saturday - Pendant Notes

On Step it Up Saturdays, I show you two cards. One is a simple and quick and the second is 'stepped up' by adding a technique, embellishments or layers.
This week, I thought I'd play with the Pendant Note Cards. This first card is a CASE of the card in the Idea Book & Catalogue (pg 171). I used the Old Olive word patterned paper from the Bold Brights Patterns pack behind the cut outs in the Pendant note card. I tied a bow with Linen Thread through an Old Olive button from the Brights button pack. The sentiment is stamped with Curly Cute and Early Expresso ink. This is a quick and easy card, and I really like the simplicity. 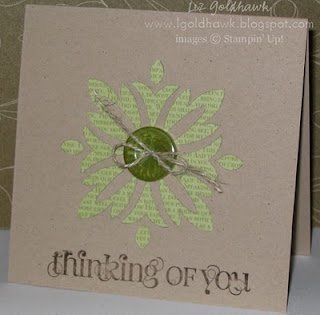 On the stepped up version of the card, I embossed the Pendant Note with the Elegant Lines textured impressions folder. I stamped on some Old Olive cardstock with Old Olive ink and the Just Believe stamp set. That was adhered behind the cut outs in the Pendant Note Card. I added some Basic Rhinestones and put a Glimmer Brad (from the Brights Glimmer Brad pack) through a Rich Razzleberry button from the Brights Button pack. The sentiment (also from Just Believe) is stamped on Naturals Ivory cardstock with Rich Razzleberry ink and punched out with the Modern Label punch. I really like the embossing on this one. Which one do you like best? 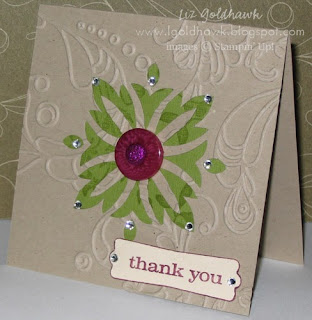 Labels: Cards, Stampin' Up, step it up

LOVE the embossed note!! it really steps it up!! tfs R ;)

Wow! Really liked the first one, then scrolled down to see the second one and Wow! Beautiful! 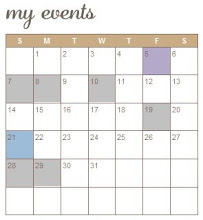 (click calendar to view) I'd love to meet you if you're in the London, ON area!

Click on the image below to order online and go to my website! Be sure to select me (Liz Goldhawk) as your demonstrator to see the best pricing! 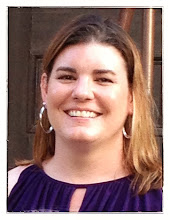 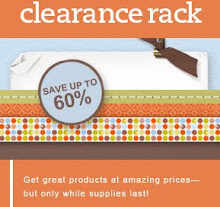 hit counter
Per Stampin' Up, this message needs to be on my blog: The content on this blog is my sole responsibility as an independent Stampin' Up! demonstrator. The use of images and the content of the classes, services, or products shown here are not endorsed by Stampin' Up!